
Where To Dock

Things To Do

Location

Articles

From outdoor enthusiasts to families making the one day trip down to “America’s Finest City”, San Diego is considered the ideal destination. With consistent mild weather, (temperatures average 70 degrees all year round) and an array of unique activities, it’s hard not to find something to love about this alluring city.

With a seemingly endless list of attractions, its difficult for visitors to narrow down just a few things to do on their vacation to San Diego. Without a doubt, one of the most popular attractions within the city is the San Diego Zoo. Voted the #1 Zoo in the World by TripAdvisor, visitors can view and learn about their favorite wildlife. The 100-acre zoo is home to more than 3,500 rare and endangered animals and also features a prominent botanical garden collection with more than 700,000 plants.

Looking to lounge in the sun? No worries. San Diego has 17 miles of coastline with plenty of gorgeous beaches. One of the most intriguing spots to land is La Jolla Cove. Described as picturesque, this small beach is great for swimmers, snorkelers and scuba divers.

Of course we can’t forget about food! After you’re done hanging around La Jolla Cove, make sure to stop by The Taco Stand for authentic Mexican cuisine. Consistently ranking at the top of “Best Restaurants in San Diego” list, The Taco Stand offers fish tacos that thousands of travelers would describe as: “Best Fish Tacos Ever.”

No items found.

Where To Dock

Things To Do

Location

Articles


Check out these awesome nearby marinas!
Annapolis Town Dock

Read All About It

Articles and news about this destination

San Diego - By Sea or By Land

There's just something about California. It's the land of dreams that beckons the dreamers, the great frontier promising glamour and glory. It's the height of American beauty the majestic purple mountains and the shining sea. And San Diego, the state's second-largest and undeniably most pleasant city, is its crowning jewel.San Diego's reputation for weather, of course, precedes it. With an average daily temperature of 70 degrees (which includes the chilly winter months, when the daytime temps can average as low as 65 degrees), it's no mystery why San Diego is called America's Finest City. Days bathed in constant brilliant sunshine give way to cool, clear, sea breeze-kissed nights.

Today's San Diego is an amalgamation of its storied past - diverse in culture, cuisine and community. It can feel cozy, metropolitan and wild in the span of a single day. San Diego has something for everyone. A city  filled with common sensibilities but uncommon paths, one can live in the area for decades and still discover something new every day. So, where, you might ask, does a visitor start? The answer anywhere.

Chase tuna along the nine-mile bank, stretching from Point Loma to Mexican waters. Maneuver your vessel around 40-ton migrating grey whales as they breach and spout. Watch pods of dolphins at recess, and curious seals search massive kelp beds for an afternoon snack all before you enter the harbor. Approach San Diego south of Point Loma, and encounter Navy SEALS training off of Coronado Island. Enter San Diego Bay and cruise along tranquil waters adjacent to a stunning city skyline. Pass underneath one of America's great warships the USS Midway and look up at its impressive hull from an entirely unique vantage point. Enter San Diego from the north at Mission Bay, and sail right into the heart of the city's coastal culture, where surf, sun and fun stretch from the eclectic Ocean Beach through Mission and Pacific beach, where young revelers and old surf legends mix and mingle.

San Diego's geography is as diverse as its people. Stretching from its pristine coast through its valleys, mountains and deserts, there is truly something for everyone. San Diego's craggy coastline features long sandy beaches, stunning cliffs and hidden gems like LaJolla's Marine Street beach. After working up an appetite surfing world-class waves, hit one of the coast's hundreds of taco shops for a fish taco the city's signature dish. If surfing's not your thing, play a round of golf at Torrey Pines, the oceanfront, city-owned, world class course that hosts an annual PGA tournament. Of course, no trip to San Diego is complete without a visit to the zoo, widely considered the country's finest. The city's bustling downtown including the famed Gaslamp District offers endless options for entertainment. Catch a Padres game and enjoy a craft beer at PETCO Park, visit the USS Midway Museum and take a stroll along the Embarcadero.

San Diego offers an adventure for every explorer. You never know what you'll discover. The only guarantee is that you'll be planning your next trip to America's Finest City the moment you leave port. 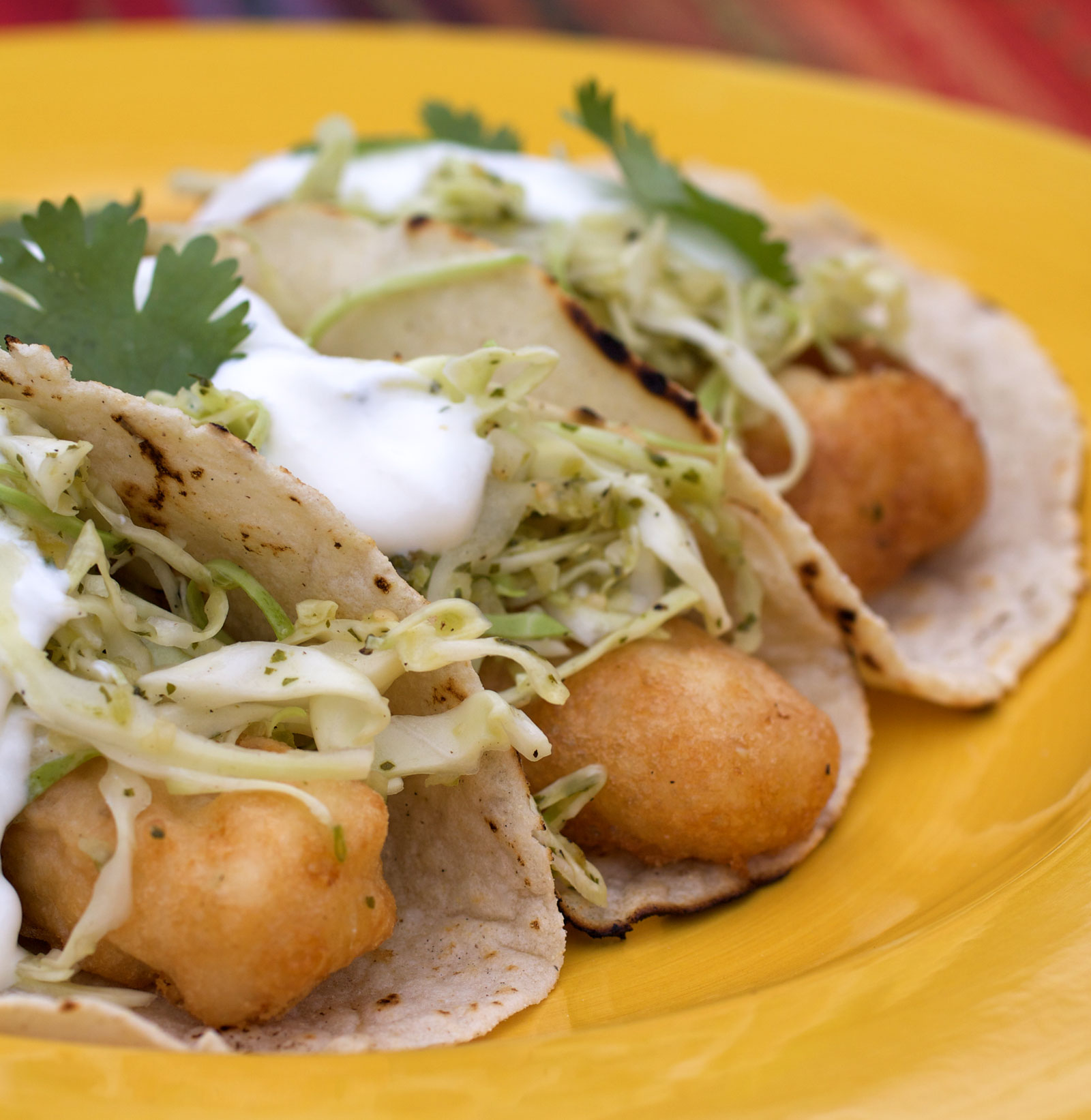 Patrick and I bounced down the string of beach towns from Malibu to San Diego. We both had our own agendas. While Patrick searched for waves to surf, I was on the hunt for the perfect fish taco.

In Huntington Beach, we ate grilled fish smothered in a piquant mango salsa. At Seal Beach, the fish tacos were drizzled with a white sauce called crema that dripped through my fingers and splattered when it hit the wooden picnic table. In Encinitas, the wave called Swami's brought howls of delight from Patrick when it rolled overhead and moans of ecstasy from me when we devoured three crispy, crunchy bundlesof tuna tacos.

From beach town to beach town, we wound down the costal highway past canyons cut deep into the hills on our left and the perfectly timed rolling sets that Patrick yearned for on our right. I was finding that there were as many different versions of a fish taco as there were waves in the ocean, but the one thing they all had in common was the lightly charred corn tortillas they were wrapped in.

Fish tacos weren't something I'd made before, and I felt I needed guidance. I headed to downtown San Diego to El Vitral, the 2010 winner of Riviera magazine's "Best Mexican Restaurant" award, to ask chef Norma Martinez her secret.

As a native of Tijuana, I grew up eating tortillas. Norma rolled her r's, making tortillas sound sexy. Every morning, I eat the first tortilla hot off the press. I spread it with frijoles and taste to make sure the flavors are clean to highlight the fish.

I took a bite of my fish taco as Norma spoke. It was true. They were clean tasting. The crunch of the beer batter gave way to soft white fish. The crisp cabbage salad cooled, and the chipotle cream zigzagged over the top left a luscious feel in my mouth.

Traditional Mexican food is healthier than the fast food you see in typical taco stands, Norma said. Baja California, the home of the fish taco, is an eight-hundredmile-long peninsula dividing the Pacific Ocean and the Sea of Cortez. It stands to reason that fish features prominently in the cuisine. According to Norma, Asian fishermen's wives began deep-frying their husband's catch in tempura and paired it with the local salsas and warm tortillas to sell on the street while their husbands were away. Tacos de pescado didn't need the help of a coyote to cross the border into San Diego they slipped across easily and set up shop as the city's favorite dish. Surfers like Patrick long ago fell in love with fish tacos' simple, inexpensive ease.

There are very few flavors in a good fish taco, Norma told me. Just make sure you have good-tasting ingredients, fresh canola oil and fresh beer batter. Her wide, toothy smile reflected her love of the food she spoke of.  The rest is all about the cerveza you drink it with.

Back home on the boat, I wanted to savor that fresh, flavorful feeling of sitting in the California sunshine and biting into the warm bundles. But as I rolled and pressed, my stack of tortillas never grew in size. As fast as I could remove them from the skillet, they were snatched by the crew, smeared with butter and inhaled. It took me doubling the recipe and pressing thirty-six disks to produce enough tortillas for a lunch for six people leading me to believe that fish tacos aren't only a staple for surfers, but one for boaters as well.

Read More
Food
 Back To All Destinations