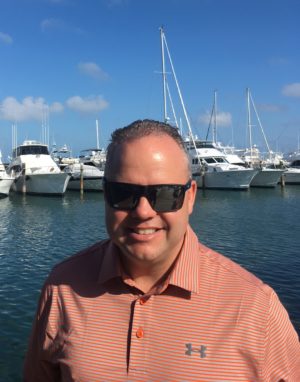 The marine industry is timeless and enduring, with tight-knit multigenerational family enterprises and long-standing networking relationships that create a business environment in which change comes slowly. Marinalife has highlighted five CEOs who are leading a revolutionary new wave of innovation in the marine industry by planting technology squarely beside tradition.

Siren Marine is an early-stage company bridging technology and the marine industry with its Connected Boat product. By monitoring and tracking vessels and managing their security systems, Connected Boat provides owners with critical remote access and information about their crafts.Siren's founder and CEO, Captain Daniel Harper, was tapping keys and writing code at the age of 7. A music major in college, he simultaneously continued to flex his computer skills, and in his sophomore year launched cutting edge software for the legal and medical industries. During these years he also developed an interest in sailing. After college, Harper embarked on a two-year sailing adventure, which expanded into two decades and a captain's license. Those years spurred Harper's development of Siren Marine and Connected Boat.As a professional captain, Harper's clients often included MIT engineering types, academics and giants of industry and technology. He learned first-hand how CEOs conduct business, handle meetings and make strategic decisions.Like all captains, Harper's duties involved navigating vessels through the maze of necessary maintenance and repairs, and constantly interacting with marine personnel. Captains know that the most significant problems that occur on boats begin as small issues on unattended vessels. In 2006, while consulting a boatyard engineer about bilge and battery tracking, Harper had his lightbulb moment. In response, he developed a cellular-based device that could be connected to a boat's bilge and battery that would automatically send text updates to a device on shore if a critical event occurred.

The first Siren device launched in 2011. Updates and new iterations continue to be released, and Harper has plans to not just expand farther into the maritime realm but into other industries and applications as well.

Founded in 1989 in Sarasota, Florida, Freedom Boat Club is the oldest and largest boat club in the nation, and provides an affordable, hassle-free option to boat ownership. Before becoming the CEO, John Giglio had had a wide range of experience dealing with every aspect of business.During college, Giglio began water skiing and kneeboarding on Lake Hollingsworth in Florida, and his interest in the water led him to become operations manager for Freedom Boat Club. For several years, he wore all the hats customer service, IT, sales, training and fleet maintenance.After receiving his MBA, Giglio knew he didn't want to be stuck behind a desk, and took the opportunity to work with a friend's father in his auto body shop. That led to seven years of valuable business experience working in a tough field, navigating clients who had been in auto accidents and the complexity of insurance claims.Knowing operations from every angle not to mention his previous time spent at the company helped Giglio with the maze of necessary negotiations when he and a partner purchased Freedom Boat Club in 2011. In 2012, when the partner retired, Giglio became the sole owner of 40 Freedom Boat Club locations, most of them on the East Coast.Under Giglio's guidance, Freedom Boat Club has developed cutting-edge technology tools to help propel and manage business. A proprietary reservation system allows members to book online and via an app. A fleet maintenance system reports and tracks repair-related issues, and there's another electronic method for tracking all expenses tied to a reservation. Even the member check-out process has been streamlined, and is handled with an iPad.Giglio's leadership, coupled with a committed crew of entrepreneurial franchise owners, keeps Freedom Boat Club thriving. Today, more than 16,000 boaters call Freedom Boat Club home, and there are more than 145 locations across the U.S. and Canada. Franchise operations are situated coast-to-coast and growing daily, and future plans are already underway for expansion into the Caribbean, Mexico and Europe.

MyTaskit is a comprehensive, user- friendly platform developed to help businesses efficiently connect between their service teams, subcontractors and customers. Finding tech solutions for business problems has always fascinated founder and CEO Kevin Hutchinson.The summer after his junior year at the University of Oklahoma, Hutchinson had to choose between lifeguarding and an internship at IBM. As much as he really wanted to do the former, he chose the latter. Upon graduating, he worked at IBM for 10 years, building new businesses and gaining substantial sales, leadership, and management training.Hutchinson got the itch for startups, and began developing electronic medical systems. Two companies he previously led Prematics and Surescripts helped to revolutionize how information is shared within the healthcare industry.Today, Surescripts is used by 70 percent of physicians and 95 percent of pharmacies in the U.S. He is a former technology advisor to both the Bush and Obama administrations and has testified to various U.S. Senate and House Committees on technology innovation.As an avid boater he's owned a ski boat, raced a Hobie 33 and now cruises Florida and the Bahamas on a 53-foot Regal he first targeted the marine industry with MyTaskit. The software facilitates service and repair work and dramatically increases efficiency, and Hutchinson realized that the marine industry was an excellent place to launch the product. But since then he has rolled out the software to many more industries as well, since the scheduling software is perfect for any business that involves coordinating tasks between plumbers, electricians, mechanics, construction and property managers, and so on and is compatible for any organization that employs between five and 1,000 people.

Ever dream of enjoying a variety of boats and yachts as often as you like, without having to own one? Enter Boatsetter, which connects renters with beautiful boats, licensed captains and insurance.Boatsetter evolved out of CEO Jaclyn Baumgarten's need to solve a problem: Her two brothers owned boats that were rarely used, and they needed to find a way to monetize them. Renting was impossible because of insurance restrictions, but Baumgarten saw the success of other on-demand companies such as Airbnb, and Boatsetter was born.Baumgarten's Stanford MBA and years spent building teams at multinational companies were useful when working with leading maritime underwriters to create the first of its kind peer-to-peer insurance policy. The policy protects boat, owner, renter and captain. Securing that insurance deal was the pivotal factor in the launch of the company.Boatsetter provides no-fee, no- membership rentals, and thousands of boats ranging from 20 to 150 feet in length are available, including captains and crew. More than half of Boatsetter's users are under 45 years old, and many renters transition into ownership when the time is right.Baumgarten believes that a company's culture is set from the top, and she wants her team to have fun while they grow and expand. Currently in key markets in the U.S., Caribbean and Mediterranean, Boatsetter plans to expand in 2018 into Mexico, the Bahamas, Ibiza, Mallorca and additional parts of the Mediterranean.

For Dan Cowens, the road to founder and CEO of Oasis Marinas and Snag-a-Slip literally led through parking lots around the Chesapeake Bay as a Towne Park valet, through eight years in the Army and finally to a highway in La Crosse, Virginia, where he pulled over to make a life-changing decision: accepting a management position with Towne Park.Working for a company that had 14,000 staff and did business at more than 1,000 locations gave Cowens extensive experience in the hospitality industry. When he decided that he wanted to merge his work life with his love of boating, he was primed. The results are Oasis Marinas, which provides comprehensive management services to marina owners, and Snag-A-Slip, which lets boaters choose a marina based on amenities, location and availability, and then book immediately without a fee.Cowens recruited a team of MBAs with deep knowledge of business development, marketing, corporate finance and hospitality, and launched Oasis Marinas in 2014. Harbor East Marina in Baltimore, Maryland, was the company's first project, and since then they have expanded their portfolio to include seven marinas with a focus on high-class, concierge-style service.Snag-A-Slip emerged in response to the boating community's need for a Travelocity-like structure for discovering new cruising destinations. It provides a seamless way for boaters to explore and compare marinas and book slips via a desktop or mobile device.With a passion for growing both businesses and a drive to always be ahead of the pack, Cowens and Snag-A-Slip acquired Marinalife in 2017. Known in the marine industry as a leading source for premium content, marina information and cruising concierge services, Marinalife brings an exciting host of possibilities to the fold.