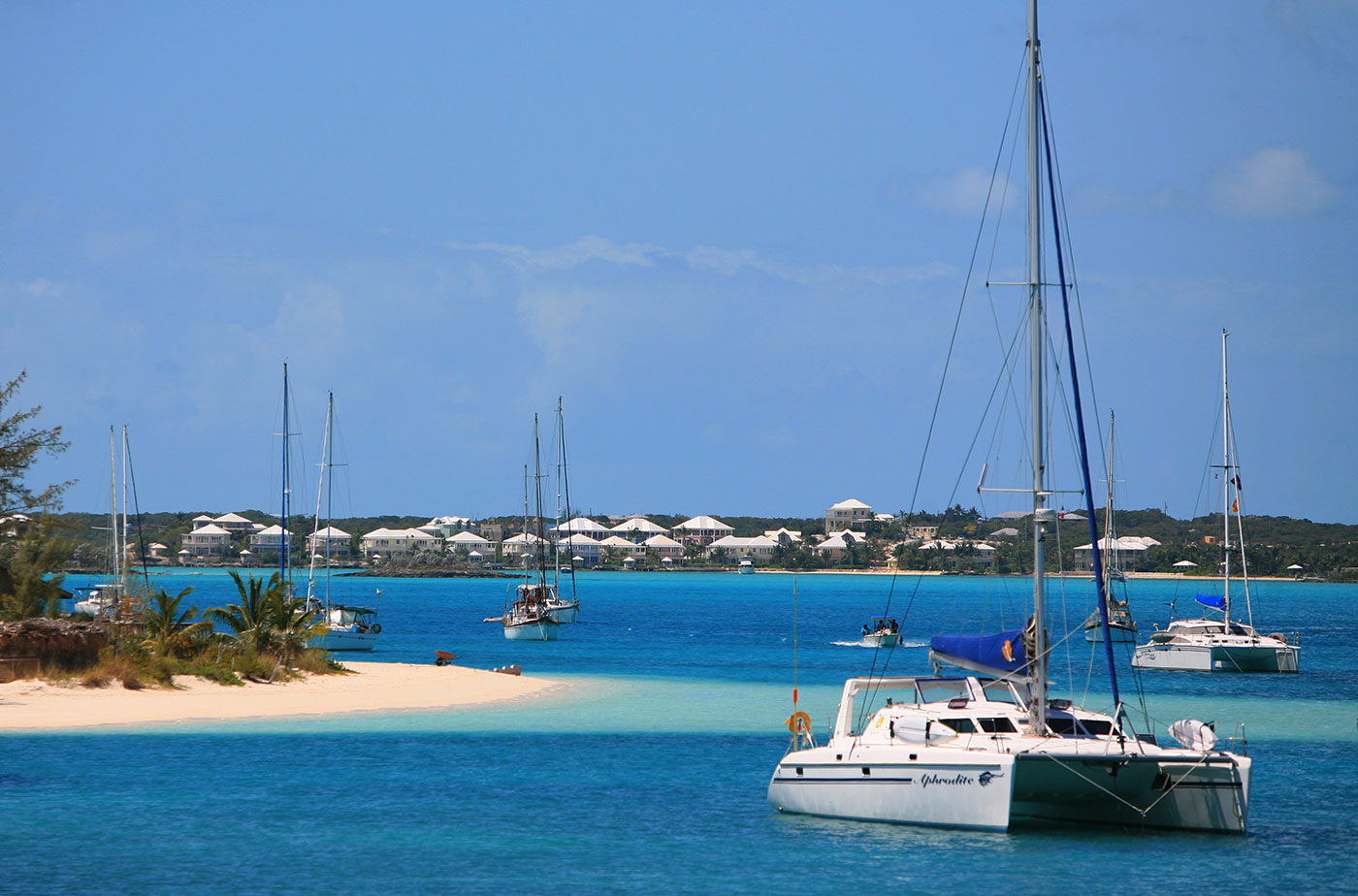 Beginning just 35 miles southeast of Nassau awaits an enchanting cluster of 365 cays and islands, called The Exuma Islands. They're divided into three major areas Great Exuma, Little Exuma and The Exuma Cays. Each section offers a unique Bahamian experience. Great Exuma and Little Exuma are known for their laid-back surroundings, while The Exuma Cays act as a playground for the rich and famous, boasting numerous private homes, luxury resorts and beachside condos. The Exumas are also rich in history, as they were settled by British Loyalists who fled the American Revolution with their slaves. They developed cotton plantations on the islands, but after many returned to England, the region's secret inlets and coves created a treasured hiding place for 17th century pirates, such as the nefarious Captain Kidd.

Many boaters leave from South Florida and stop at either Bimini or Nassau to break up the 150 nautical mile trip. Nassau/Paradise Island is a great jumping off point to Highbourne Cay, your first stop in the Exumas.

Albany Marina, a 600-acre luxury resort community on the southwestern end of New Providence, includes a 71-slip, mega-yacht marina for vessels up to 240 feet. This lovely planned community includes tons of amenities from a luxury boutique hotel to a championship 18-hole golf course designed by Ernie Els.

Once a refuge for escaped slaves during the Colonial Era, Highbourne Cay is now home to a stunning, scarcely visited beach along the east coast. The island sits at a slightly higher sea level than is found on most Bahamian islands, so it's easy for boaters to spot. Peer over the dock to see nurse sharks flocking together like birds seeking bread, while local dockhands throw unwanted conch into the water. Highbourne Cay Marina features 750 feet of face dock for yachts up to 180 feet and 16 back-in slips for boats up to 75 feet. Boaters can provision with fuel, water, ice, groceries and basic supplies from the Highbourne Store.

Stretching 20 miles from Wax Cay Cut to Conch Cay Cut, Exuma Cays Land & Sea Park was a pioneering initiative established in 1958 to protect and preserve the marine environment. The park is pristine, and no one is permitted to remove anything, living or dead, from the area. The park includes hiking trails and perfect beaches with diverse wildlife, tropical foliage and many species of birds. The Warderick Wells park office offers a gift shop, ice, wireless Internet service and visitor information. Its moorings are first-come, first-served (Hail Channel #9).

The marina at Compass Cay, located in one of the rare, totally protected harbors in the Exumas, is accessible from both the Exuma Banks and Exuma Sound through channels marked with buoys and range markers. Boats with up to 4.5-foot draft (6 feet at high tide) can enter the harbor from the Banks by following the channel marked with buoys and a range. Deeper draft vessels up to 6.5 feet enter the marina from the Exuma Sound through Joe Cay Cut by following a series of channel markers and a range.

Tucker, the owner, cheerfully guides first-time cruisers into the harbor where depths range from 10 to 16 feet. Visitors won't want to miss swimming with pet sharks at the marina and walking to the Bubble Bath, a lagoon fed by water from the sound that breaks over lava rocks. Close by are the Rocky Dundas with the most spectacular snorkeling caves filled with stalactites and stalagmites, fossilized beetles and other aquatic creatures. The cave walls are imprinted with shells and coral.

Jimmy Buffett listed Staniel Cay Yacht Club as among his top 10 island bars, and most patrons agree that it's the Shangri-La of the Exumas. One of the main tourist attractions is diving into the cave where parts of the James Bond movie Thunderball was filmed. Do not miss a visit to a small local cay called Big Majors to swim with the pigs. Take your dinghy and motor to Big Majors, where wild swimming pigs love leftover conch fritters or any food you bring to them. The 18-slip marina has 14 charming bungalows and a well-known restaurant and bar (with live music and an eclectic crowd) as well as fuel, electricity, fresh water, ice, bait and Wi-Fi.

Little Farmer's Cay is a picture postcard settlement in the Exuma Cays famous for sloop racing and diving. The marina has moorings available in a well-sheltered anchorage and four slips for yachts up to 120 feet and 9-foot draft. The marina offers fuel, a restaurant/bar and lodging on-site, and a small airport is located nearby.

Leg 6: The Marina at February Point

The marina at February Point is a state-of-the-art marina spanning five acres with concrete floating docks for vessels up to 150 feet. The marina offers every amenity you can imagine shopping, spa services, several dining options, swimming pool, provisioning and fuel service. Also, February Point is only minutes from George Town and 20 minutes to the airport.

On nearby Stocking Island, don't miss a visit to the Chat N' Chill, a popular spot to hang out and play beach volleyball, feed stingrays on the beach and visit nearby Angelfish Blue Hole & Mystery Cave, where you can snorkel among eagle rays, turtles and other beautiful fish.