Experience the Rich Culture of the Dominican Republic- Island of Hispaniola

The Dominican Republic sits on the eastern half of the island of Hispaniola, the second-largest Caribbean isle after Cuba, and it is nestled roughly in the center of the region between Cuba and Puerto Rico. Boaters will find an amazingly diverse country with top-notch marina facilities, world-class resorts and plenty to explore on shore once you have docked. Dominican culture is lively and rich. Spend the day at a packed baseball game (Dominicans are crazy for baseball), and then dance the night away to the frenetic and irresistible sounds of merengue and bachata. Coming from the north, boaters can start their Dominican adventure in Puerto Plata and then cruise south to Punta Cana, on the eastern coast, and from there head to La Romana on the south coast.

‍Ocean World Marina (oceanworldmarina.com) can handle yachts up to 250 feet and is fully loaded with top-notch amenities. It is also located adjacent to Ocean World Adventure Park, an interactive marine park with the largest man-made dolphin habitat in the world, a swimmable aquarium and a shark interaction pool.

Watersports:Windsurfing, kiteboarding and parasailing are popular pursuits here, and the beach town of Cofresi is a great place to try them out. Twenty minutes away is Cabarete, one of the best spots for windsurfing and kiteboarding on the planet.

‍Rio Damajagua: Hike up the trail along the river -- and then splash, jump and swim your way back. There is a network of 27 waterfalls that lead one into the next, all naturally formed.

‍Brugal Rum Factory: This is world's third-largest producer of rum and the largest in the DR. Tour the facilities and sample one of its house-made daiquiris.

Marina Cap Cana (marinacapcana.com) has more than 100 slips, can accommodate vessels up to 200 feet, and is just seven minutes from Punta Cana Airport. Amenities include a fuel dock, WiFi, and customs andimmigration offices. The facility is set within a picturesque resort village that boasts a lovely hotel, spa, salon, bank, and beach club. Shuttles can take you from the marina to the various restaurants and shops in the development.

Hoyo Azul: Punta Cana is renowned for its stunning beaches, but there are less-known sites that are equally as stunning. Hoyo Azul is a spectacular lagoon at the base of a 170-foot cliff, and its sparkling turquoise waters go down to 120 feet.

‍Golf: This area is the Caribbean's golf mecca, with more than 10 stellar courses designed by the likes of Jack Nicklaus and Tom Fazio.

‍Jeep safari tours: Take to the back roads for a wild ride that will include a swim at an unspoiled beach, a drive through sugar cane fields and a traditional Dominican meal.

‍Cueva Fun Fun: Rappel down into one of the DR's largest limestone caves and explore the stalactites, stalagmites, and pre-Columbian rock art.

‍La Marina & Yacht Club at the Casa de Campo Resort (casadecampo.com.do), has 350 slips and a full-service shipyard with a 250-ton lift and can accommodate boats up to 250 feet. It sits within a beautiful development inspired by the architecture and spirit of Mediterranean villages. The sailing school has 424 boats and instructors from Costa Smeralda, in Italy the numerous shops around the grounds sell precious goods, such as fine linens handcrafted by women on the sugar farms; and the resort community has no shortage of excellent restaurants, including one from the family that owns Le Cirque.

Altos de Chavon: A re-created 16th-century European village, where virtually every element -- door frames, cobblestones -- was crafted by hand. A gallery specializes in work by Dominican artists, boutiques sell pottery and jewelry, a museum highlights pre- Columbian artifacts and culture, and a 5,000-seat amphitheater --inaugurated by Frank Sinatra in 1982 -- has hosted entertainers such as Sting, Shakira,Gloria Estefan and Marc Anthony. The Church of St. Stanislaus contains a hand-carved statue that Pope John Paul II sent from Krakow to commemorate the church's opening.

‍Horseback riding and polo watching: Take a scenic trail ride (Western or English, your choice) with one of the expert guides from the equestrian center at Casa de Campo. The center also organizes professional polo matches from November through April.

‍And, of course, golf: La Romana rivals Punta Cana for golf greatness. It may not have as many courses, but it does have several designed by Pete Dye, including the oceanfront Teeth of the Dog, consistently ranked the best course in the Caribbean.

The buzz of construction at the docks of Camden, ME, is finished, and it’s been replaced with an air of excitement among residents and visitors who watched a beautiful new development emerge along the waterfront.

The rebirth of Camden’s harbor started in 2015 when Lyman-Morse bought Wayfarer Marine. Based in nearby Thomaston, Lyman-Morse has run a successful boat-building business since the 1970s. More than 120 vessels have been constructed in the yard, located in the same site where Malabar schooners, Friendship sloops and other fine vessels have been built for nearly two centuries. Lyman-Morse has expanded beyond custom sailing and motor yachts, now offering high-quality refits, and other services.

Lyman-Morse’s boatyard and nine-acre facility enjoy a long maritime tradition on Camden’s shoreline, ranging from building schooners in the 19th century to U.S. minesweepers and troop transports in World War II, and servicing vessels from high-end yachts to recreational boats.

The location of this acquisition is idyllic. Nestled in a lovely cove on Penobscot Bay, Camden has been a bastion of seafaring activity and a world-
wide nautical travel destination for centuries. The scenery is dramatic, with forested mountains that meet the ocean and offshore islands that are an explorer’s
paradise. The 1830s Curtis Island Lighthouse near the harbor keeps watch over the town’s quaint homes, shops, restaurants, opera house and galleries.

Inspired by the area’s natural beauty, the new development’s designers also understood Camden’s historic role in the region and wanted to carry that forward in modern form. They studied vintage photos, matched the style and created 33,000 square feet of new buildings for marine services and mixed-use commercial space.

Lyman-Morse’s Camden boatyard attracts maritime professionals and boaters with essential services for carpentry, mechanics, electronics, rigging and more, and brings the general public back to the working waterfront with amenities such as restaurants, a distillery, a few overnight accommodations, and a boardwalk big enough for a morning stroll or brisk dog walk.

Added bonus: Sensitivity to the environment was not overlooked in construction. Engineers took a sustainable approach when they elevated all structures above the flood plain, installed LED lights and upgraded all systems to today’s energy-efficient levels.

True boaters say the real Maine coast doesn’t start until you reach Penobscot Bay. This is “Down East” from Kennebunkport and Portland. The dramatic stretch of coastline from Camden to Mount Desert Island sparkles with granite shores, dotted with archipelagos of pine-tree covered islands and mountains cascading into the sea. This region offers some of the best cruising ground in the world.

Camden is a magical little seaside town in the heart of Maine’s mid-coast. It’s historic but hip. “Where the Mountains Meet the Sea” is their moniker, as Camden Hills and 780-foot Mount Battie stretch down toward the bustling waterfront where this 1769 New England village sits, creating a postcard scene.

Camden is super foot-traffic friendly, starting at Harbor Park and the beautiful brick Public Library that graces the top of the bay by the Town Docks. Enjoy a picnic on the sprawling park lawn; there’s often a craft festival or free concert at the outdoor amphitheater. From the waterfront, stroll the quaint sidewalks leading to cafés, boutiques, craft stores and art galleries, pubs, and surprisingly trendy restaurants.

You can hike, bike or drive the toll road up Mount Battie in Camden Hill State Park, which encompasses 5,500 acres and 30 miles of trails. Your reward is spectacular panoramic views of the harbor and Penobscot Bay below.

Eaton Point, at the eastern entrance to the harbor, is home to a new Lyman-Morse yacht facility. Camden remains a working harbor with lobster fishermen, boat builders, ferries and tall-masted schooners taking folks out for scenic sails.

Camden hosts festivals throughout the summer season of jazz, film and its trademark Windjammers. In winter, the U.S. National Tobogganing Champion-ships are held at Camden’s namesake Snow Bowl – our country’s only ski area with views of the Atlantic.

Camden is an ideal boater’s gateway with all the services and shops you need in walking distance from the waterfront. Excursions from this protected harbor are countless and legendary. A quick cruise brings you to quiet Lasell Island for a sunset anchorage. Farther on you reach Maine’s Maritime Academy home in beautiful Castine, and the rustic islands of North Haven, Vinalhaven and Deer Isle. Ultimately you can cruise north and east through beautiful Merchants Row, or the more protected Eggemoggin Reach, to Mount Desert Island, home to famed Acadia National Park, Northeast, Southwest and Bar Harbors.

Contact the harbormaster for overnight slips, limited but in town, and moorings throughout the harbor.

‍Across the harbor on Camden’s east shores, this revamped marina is a half-mile walk to town, with new docks and a marina facility, home of Lyman-Morse Boatyard and 30 slips plus moorings.

Relish artful cuisine locally sourced from farmers, fishermen and “foragers.” In an historic wool mill in downtown Camden, it’s comfy but chic. Savor octopus, lamb, mussels, salmon and more with fresh produce and creative sides. Save room for dessert made from scratch.

‍Get your chowder and Maine lobster fix from Chef Peter. This classic setting overlooking the harbor is a Camden staple you “ott” not miss. Open for lunch or dinner.

For fresh-brewed morning coffee and daily “boiled then baked” bagels or breakfast sammies served all day. 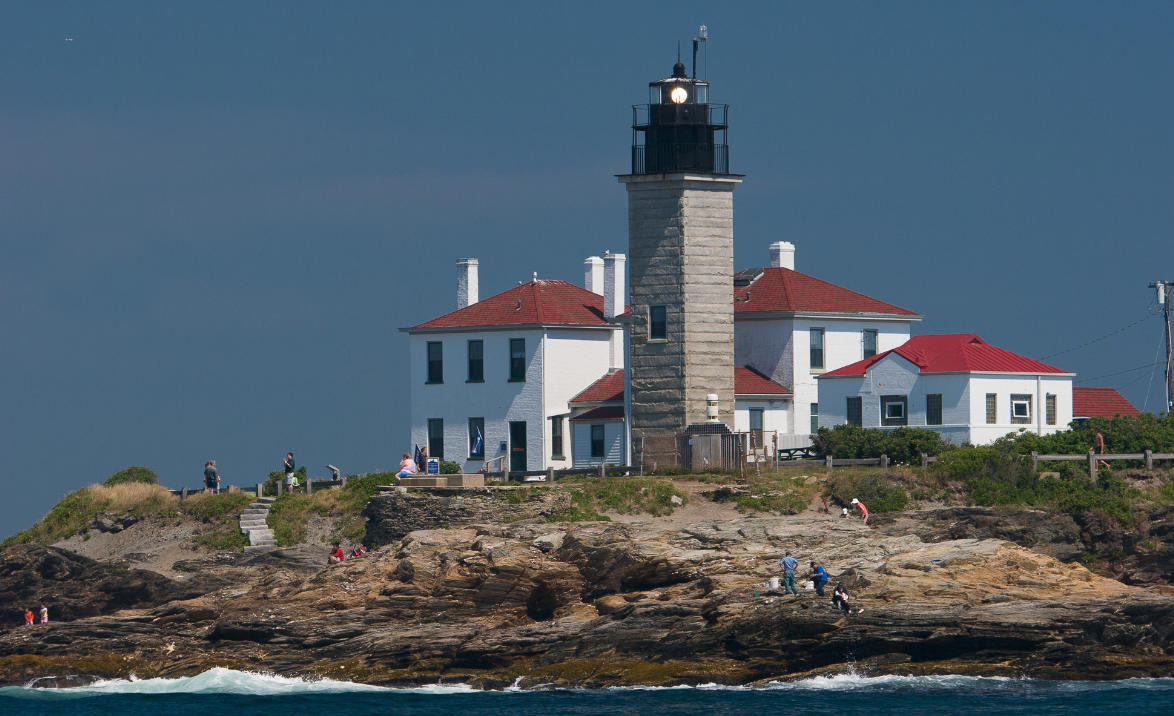 Jamestown was settled early in colonial history and was named for James, Duke of York, who became King James II in 1685.  By 1710, many of Jamestown’s current roads were already in place and a lot of its early architecture is well preserved. Soak up some local history at the Jamestown Fire Memorial Museum, Beavertail Lighthouse Museum and Park, Jamestown Windmill, Watson Farm, Conanicut Island Sanctuary, Fort Wetherill State Park, and the Jamestown Settlement museum.

The main town, shops and restaurants are located on the eastern shore of Conanicut Island.  But even from the western side, Dutch Harbor and other attractions are easily accessed with a one-mile walk.

This full-service marina has a ships store/chandlery, gift shop, extensive dockage and a large mooring field.  It’s located in the heart of town overlooking Newport and the Pell Bridge, but bring your fishing poles for the kids.

Located on the west passage of Narragansett Bay, this small, local marina has good moorings, launch service and facilities.  At times, the harbor can be rolly from a SW wind up the West Passage.  The holding ground is excellent for anchoring, but the dinghy dock is by seasonal permit only.

Jamestown Boatyard is renowned for excellent workmanship on all types of boats.  It also has a large mooring field and is in a beautiful location on the East Passage.

This family-owned café and bakery with an outdoor patio is an ideal spot for breakfast and lunch, especially if you’re looking for tasty gluten-free and vegetarian options.

Take a seat inside this rustic eatery or outside on the patio to enjoy wood-fired bread, pizzas and pastries with a cool beer or wine.  To start your day with a smile, order a cup of the eco-friendly coffee.

Inside the Wyndham Bay Voyage Inn, this casual dining establishment presents a seasonal menu of American cuisine standards and seafood with fresh ingredients and a stellar view of Narragansett Bay.