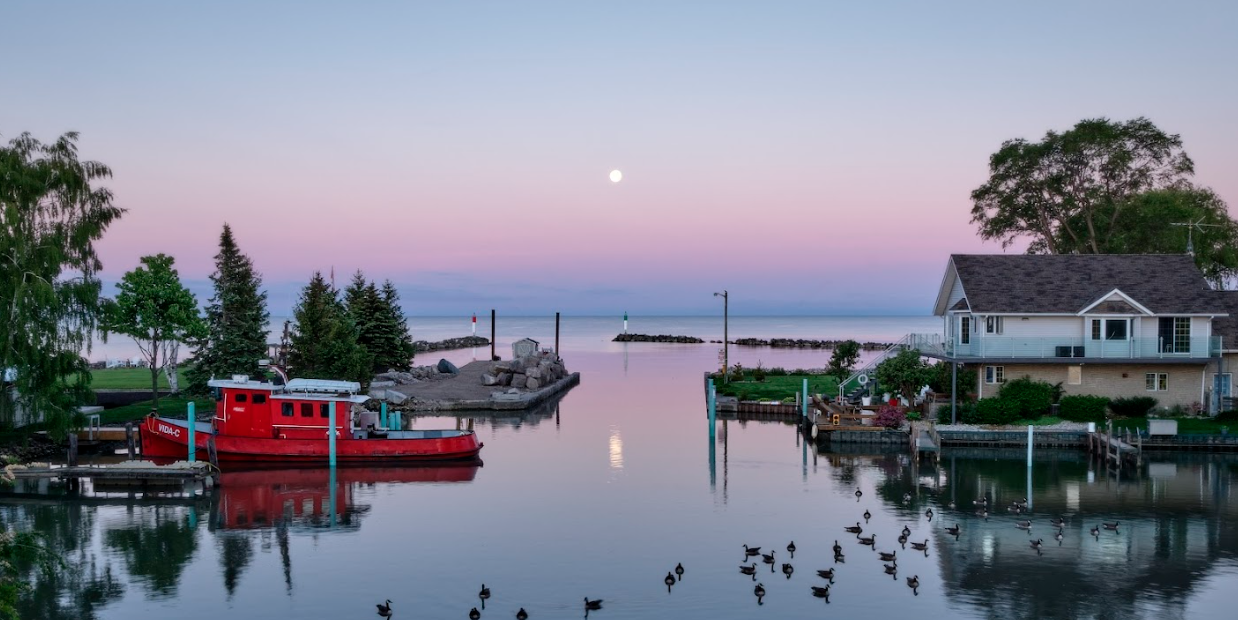 Once branded a dying body of water, now the ultimate "fixer upper".

In real estate, the term “fixer upper” usually refers to a property that requires restoration to meet its full potential. Many of our cruising grounds could easily be referred to as “fixer uppers,” as enumerable rivers, lakes and coastlines need serious restoration.

The impact of human activity on an ecosystem can be devastating. Restoration efforts can offset and redeem bodies of water once written off as beyond hope. One such transformative example is the story of Lake Erie. Once considered an almost dead body of water, it has become a thriving boating and fishing destination.

The plight of Lake Erie may be demonstrated in a quote from Dr. Seuss. Written in 1971, The Lorax highlighted environmental neglect and pollution. It included this line, “They’ll walk on their fins and get woefully weary in search of some water that isn’t so smeary. I hear things are just as bad up in Lake Erie.”

This Great Lake had a well-known pollution problem. Those who attempted to enjoy its waters recreationally were careful to not ingest the water, only swam in shallow areas treated with bleach, rinsed off immediately after contact and never ate fish from the lake.

SMOKE ON THE WATER

Since the 1800s, a lack of governmental oversight led to unchecked dumping of chemical pollutants, waste and pesticides into the lake and its surrounding tributaries. Floating mats of algae, oil slicks and rancid debris made much of the waterway unsafe for swimming or fishing. Lake Erie’s contributing rivers were so congested with oily industrial waste that river fires were common.

‍
In 1969, sparks from a nearby train track ignited a fire on Ohio’s Cuyahoga River. While one of the river’s smaller fires (extinguished in under 30 minutes), it ignited a national awareness of the pollution problem. Time magazine covered the fire in an article along with photos and statistics. Readers were stunned. Reports
of billions of gallons of inadequately treated waste from industries, farmlands and residential areas spurred public outcry.

‍
The U.S. government responded by passing the Clean Water Act of 1972. Passage of this act enabled localities surrounding Lake Erie to regulate industrial and wastewater discharge and released funding to update waste management infrastructures in communities. Lake Erie saw an immediate positive impact from these actions, yet the issue of toxic algae blooms remained.

A turning point for Lake Erie came in 1972 with the establishment of the Great Lakes Water Quality Agreement between Canada and the United States. This binational effort specifically targeted phosphorus reduction. New laws reduced use of phosphorus in detergents and encouraged regulated agricultural use. New sewage treatment plants were upgraded and expanded. By 1980, the result of these changes become evident, beaches were re-opened and once depleted fisheries roared back to life.

Today, Lake Erie boasts some of the best fishing in the Great Lakes. Recent studies show anglers favoring Lake Erie to other Great Lakes by over 10%, making it a popular fishing destination. One of the more sought-after fish is the walleye, and the lake is now home to more than 100 million of them. Steelhead, a migratory rainbow trout, attracts anglers from across America, and small mouth bass are a staple game fish.

But is it safe to eat what you catch here? While all Lake Erie fish are safe to eat, not all are safe to consume in unlimited quantity. Residual toxins from Lake Erie’s more polluted days remain. Anglers seeking to make a meal are mindful of recommended consumption based on the species and size.

Lake Erie has seen great restoration strides but is not without ongoing concerns. Algal blooms continue to plague the waters and require monitoring and advisement for water safety. Invasive species, such as the zebra mussel, are another battle for environmentalist. Introduced to the Great Lakes through the ballast of trans-Atlantic
ships, the zebra mussel has no natural predator. The good news is that the zebra mussels provide a natural filtration process that may help clean water. The bad news is that without a natural predator, these fast-reproducing mussels are clogging up pipes and water intakes. Water treatment facilities, and power plants are dealing with potential outages and expensive maintenance.

Lake Erie’s ongoing restoration involves working across state and international boundaries and using multiple and varied organizations as well as those who live around the lake. The agricultural industry surrounding Lake Erie is tasked with restricting phosphorus use. Residents in urban areas avoid using products with phosphorus ingredients.

Because these efforts are voluntary, educational and public awareness campaigns, they are vital to support restrictive practices and promote responsible use. Funding and grants are used to research reducing harmful farm runoff with minimal impact on the industry, monitor algal blooms and tract sources as well as upgrading water treatment technology.

Oh, and about that Dr. Seuss quote... 14 years after publication, Dr. Seuss removed the reference to Lake Erie from The Lorax in a nod to the success of Lake Erie’s efforts.