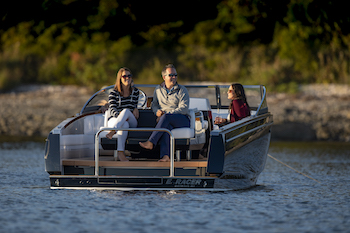 IDEAS THAT CHANGED BOATING TODAY AND WILL IN THE FUTURE

Cell phones, sat phones or sophisticated communications (and other marine innovations) did not exist back in the late 1960s when on a dark stormy night off the New Jersey coast, Ernie Bareuther and two buddies found themselves stuck on a sandbar during a sports fishing trip. The only way Bareuther could let his worried wife know what was wrong was via the high seas radiotelephone service that made ship-to-shore calls.

Flash forward a decade and Bareuther recalls the story of another distressed spouse. This time, farther south in St. Thomas, U.S. Virgin Islands, she stood at the dock at 2:00 a.m. because she had not received word from her husband who cast off that morning to marlin fish on the infamous North Drop nearly 30 miles offshore.In both cases, all turned out well. The tide came in and refloated Bareuther's boat. The marlin fisherman was found by a U.S. Coast Guard helicopter and returned home safely at dawn. But cell phones would have saved both wives a lot of worry.

Telecommunications are indeed one of the biggest innovations in the recreational marine industry over the past two decades. That's not all. Here's a sampling of other cutting-edge 21st century advancements.

The first TV remote control entered American homes in the 1950s. Today, you can use a wireless remote to point at the autopilot and turn a vessel on any course desired. Garmin Ltd., headquartered in Olathe, KS, introduced such a device, its Reactor Autopilot Remote controller this year. It's affordable, plus the screen is readable in bright sunlight, the unit is waterproof, and wrist and neck lanyards make it user friendly on the seas.Similarly, the first video game joysticks debuted in the late 1960s. Netherlands- founded Vetus translated this technology to boats with its latest V-Docker joystick docking system. It's intuitive

to operate and works with a single, mechanically controlled engine and a combination of bow and stern thrusters to target power for inch-perfect maneuvering.

"We developed the V-Docker to ensure that running a boat is pure pleasure, with no more stressful docking scenarios. In fact, it is so straightforward to operate, you can dock with just one hand," says Pieter Feenstra, Vetus senior sales manager.

Concierge Service in the Palm of Your Hand

Travelocity and Expedia both launched in 1996 to make online hotel booking easy. Yet on the seas, finding slip space when cruising often meant old fashioned circling the harbor several times akin to finding a spot in a busy parking lot. Now, mobile marina reservation apps like Snag-A-Slip, which started as CEO Dan Cowens's business school project at the University of Maryland, connects boaters with available slips, while also highlighting marinas via digital channels in the same way that hotels are promoted digitally.

"The mobile-responsive website and mobile app allow boaters to explore by region or marina name and then search for slip availability based on travel dates, length, beam, draft and power requirements," explains Maggie Nunley, product manager of the Annapolis-based company whose service is available from Canada to the Caribbean.

Similarly, Waterway View app was developed by Jim Hilker, president of PlacesMobile Inc., with the assistance of the Marine Industries Association of South Florida. Its key feature is a 3D interactive virtual tour display built on and expanded from Google Maps and Street View technology.Boaters can see drawbridges, inlets, and channels, discover where to dock, get fuel, find shipyards and marinas. It's useful off the water to find and explore parks, restaurants, marinas, shops, and other places of interest.

Remember the old life ring, first invented in 1855? Now, in a man-overboard situation, you can rescue someone by throwing a bright yellow raft 40-plus feet or dropping it to the victim by drone. The TD2401 model made by ThrowRaft in Fort Lauderdale is the first USCG-approved, inflatable rescue personal flotation device of its kind. Plus, space onboard is always at a premium, so this device is small when you want it to be (nine times smaller than a traditional ring buoy) and large when needed (22 x 21 inches inflated).

"AIS (automatic identification system)/PLB (personal locator beacon) can be added inside the TD2401 for immediate rescue," says ThrowRaft's Tony Faletra, who invented the product after his boat began sinking nine miles off the coast of Florida and he had to swim 16 hours back to land.

As for communications, Shakespeare Marine, in Columbia, SC, developed the world's only inflatable VHF antenna. Most emergency antennas are only six inches long to store easily, but they have only a three- to four-mile range. The INFL8 is five feet long and match the performance of any other 3dB antenna, and depending on mounting height, can get a range three to four times farther, says Dave Manasseh, European sales manager for antennas.

The Netherlands launched the world's first driverless vehicle, the ParkShuttle, in 1999. Move forward 20 years, and the Netherlands and Massachusetts Institute of Technology are three years into a five-year collaborative project to create driverless boats. Currently, the idea is for Roboat, technically termed an autonomous floating vessel, to populate and move people and things through Amsterdam's waterways.

This technology translated to non-commercial boating can't be far off. Yet, what is now in recreational boaters' reach are electric and solar powered vessels. Hinkley has its Dasher 2.0, where Whisper Drive propulsion inside and lightweight artisanal teak on top make this 28-footer an enviable luxury yacht that can cruise up to 40 miles on one charge.Meanwhile, Austrian boatbuilder, Silent Yachts, debuted its 55-foot oceangoing solar-electric power production catamaran at the Cannes Yachting Festival this year. A signature configuration of the solar panels assures they generate enough power for everything from propulsion to galley appliances. We have built 10 solar electric catamarans and we have 11 more under construction ranging from 55 to 80 feet, says Michael KÃ¶hler, founder and CEO.

Roll Over No Longer Mechanics

Two decades ago, the motion of the ocean made boating more popular with those who had strong stomachs. Now, and not just for superyachts and cruise ships, Seakeeper, based in California, MD, makes small, efficient computer-controlled gyro stabilizers that can eliminate up to 95% of the roll on boats 27 feet and up.Inside a vacuum encapsulation, a flywheel spins at speeds of up to 9,700 rpm. When the boat rolls, the sphere tilts fore and aft (precesses), producing a powerful gyroscopic torque to port and starboard that counteracts the boat roll, explains Kelsey Albina, communications manager. Seakeepers use modest electrical power (12-volt DC on models for vessels 27- to 52-feet), have no outside appendages and can be installed almost anywhere on board.

The term artificial intelligence (AI) was first coined in the 1950s. By the end of the 1990s, Sony introduced an improved AI domestic robot and a prototype dog-like pet. While fully robotic boats, able to self-drive as well as shake up cocktails, may be on the horizon, individual marine electronics are now key crew members.

Beyond this and on the safety side, Vesper Marine's Cortex is VHF radio reimagined. Our local waterway gets pretty busy at times, says Jeff Robbins, CEO of the New Zealand-based business. "When a large vessel is on a potential collision course with me, trying to hail them on channel 16 isn't always best or timely."

The Cortex DSC (digital selective call) feature lets me touch that vessel on my screen and immediately initiate a direct call to its VHF. With the information on my Cortex handset we can have a quick conversation about my position or crossing plan, which is great for us both, Robbins adds.

Plus, instead of toothpaste-consistency, mask-like zinc oxide, skin care company Neora International, in Addison, TX, has innovated its Invisi-Bloc SPF 40 gel where microcapsules of UV filters absorb and protect but don't show or clog pores. "We couldn't find a good facial sunscreen that we liked to use, so we created our own. The motivation was to make a facial sunscreen someone would love to use every day," says Christina Lee, director of product development.

Finally, on the apparel front, Columbia Sportswear Company has come out with new shirts for men and women that block the full spectrum of UV rays by using a tight weave construction, UV absorbent yarns and ceramic reflectors. The Portland, OR-headquartered company earned the Skin Cancer Foundation seal of recommendation