A Historic Stop Worth the Detour


Where To Dock

Things To Do

Location

Articles

One of the most rewarding items for regular cruisers on the Atlantic ICW is revisiting their favorite stops each year, especially if those stops are directly on the ICW. But some of the most interesting places are a little off the “magenta line.” Taking the time to reach these places will reward those who make the effort. St. Marys, Georgia, located 4.5 nautical miles west of the ICW at the Georgia-Florida border, is one of those stops worth the detour.

Settled on a scenic bend in the St. Marys River, this historic town has made the most of its riverfront location. It is the gateway city to nearby Cumberland Island National Seashore. The seashore’s visitor center, museum and ferry terminal are located in the center of town. The seashore covers most of Cumberland Island, Georgia’s largest barrier island. With almost 10,000 acres of preserved habitat, the island contains numerous distinct ecological areas, giving it the greatest biodiversity of any of the southeast coast barrier islands.

If you visit just once, St. Marys might become a regular detour you look forward to repeating every year.

No items found.

Where To Dock

Things To Do

Location

Articles


Check out these awesome nearby marinas!
Annapolis Town Dock

Read All About It

Articles and news about this destination 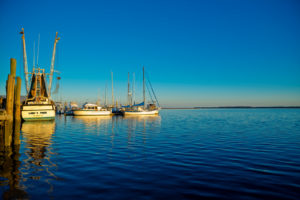 Where to Dock and Dine in Historic St. Marys, Georgia

One of the most rewarding items for regular cruisers on the Atlantic ICW is revisiting their favorite stops each year, especially if those stops are directly on the ICW. But some of the most interesting places are a little off the "magenta line." Taking the time to reach these places will reward those who make the effort.

St. Marys, Georgia, located 4.5 nautical miles west of the ICW at the Georgia- Florida border, is one of those stops worth the detour.Settled on a scenic bend in the St. Marys River, this historic town has made the most of its riverfront location. It is the gateway city to nearby Cumberland Island National Seashore. The seashore's visitor center, museum and ferry terminal are located in the center of town. The seashore covers most of Cumberland Island, Georgia's largest barrier island. With almost 10,000 acres of preserved habitat, the island contains numerous distinct ecological areas, giving it the greatest biodiversity of any of the southeast coast barrier islands.

The island also tells the tale of man's use for more than 4,000 years, from the first Indian residents to the plantation era, and is still marked by the ruins of Gilded Age mansions.

Cumberland Island alone could be enough to draw any outdoor or history enthusiast to St. Marys, but it is only one of St. Marys' many treasures. Also located nearby is the Kings Bay Naval Submarine Base, one of only two Trident submarine bases in the world. To learn more about the base and the town's history with the submarine fleet, visit the St. Marys Submarine Museum. Located on the waterfront, the museum is a tribute to the "Silent Service," the ships and the men who serve aboard them.

St. Marys rewards visiting boaters with so much more. Less than a 20-minute bike ride from the waterfront, boaters have access to most needs, including hardware, pharmacies, groceries and personal care services. You'll also find some of the friendliest folks of any town along the waterway. When visiting, it is not uncommon for a resident to offer you a ride to the store or to give you a tour of the area.

Holidays are a special time for cruisers in St. Marys. A cruisers' potluck dinner is hosted by the Riverview Hotel every Thanksgiving, with side dishes contributed by the cruisers and the turkey provided by the hotel. The hotel is located on the waterfront at 105 Osborne Street.

If you visit just once, St. Marys might become a regular detour you look forward to repeating every year. 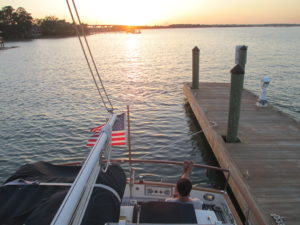 America's Waterways - A Year of Experiences Along the Great Loop: Part 3

While doing the Great Loop, we learned to keep advance planning to a minimum. We like to think that a lack of schedule helps us embrace spontaneity and explore unfamiliar waters. While on the Great Loop, we learned that there are a staggering number of historic, out-of-the-way places along the route. Waterfront towns we had never heard of beckoned us to linger and embrace their beauty, their history and their people. Our goal became more about the destination than the journey.

This philosophy served us well after we departed Jacksonville, Fla., at the end of March. As the warmth of spring crept slowly northward, so did Spiritus.

One of our many memorable encounters during our ICW leg was the little town of St. Marys, Ga. St. Marys touts itself as the Gateway to Cumberland Island, but it has an interesting past of its own that dates back to the early 1700s. As we strolled through the waterfront park, locals greeted us as if we were long-time friends, and the preponderance of fishing boats along the city docks guaranteed that dinner at the local Lang's Marina Restaurant would include nothing but the freshest seafood.

Cumberland Island, Jekyll Island and St. Simon's are some of the more well-known vacation destinations we passed as we cruised north. An impending thunderstorm forced us off the ICW to seek refuge at Two-Way Fish Camp Marina, north of Brunswick. The restaurant patrons at Mudcat Charlie's, used to seeing nothing larger than a bass boat up river, came down to Spiritus to get a closer look. We loved sharing our story and were delighted by their inquisitive enthusiasm for the Great Loop.

Our first stop in South Carolina was at Hilton Head Island, the famous golfing mecca. Since I gave up the sport after purchasing Spiritus, I was resolved to merely admire the insanely immaculate, manicured courses from a distance. For this nongolfer to be able to sit on his boat, with drink in hand, and absorb the island's idyllic natural sounds and beauty was a gift in itself.

Another town off the ICW's well-beaten path that we explored was Edisto, S.C. The natives were again friendly, helpful, unhurried and laid-back traits that we noticed are shared among most coastal dwellers.It was only after completing The Loop that some friends informed us that Edisto's marvelous beaches are a favorite vacation spot for many Carolinians.

The seemingly continuous marshlands of Georgia and the charming low-country of South Carolina gave way to more urban settings as we continued north. Boats of all shapes, sizes and origins filled the marinas surrounding Charleston. We roamed her museums, colonial homes, historic churches and Civil War sitesover the course of several days. We satiated our palates at exquisite eateries. After playing hard in Charleston, we escaped to the small towns of McClellanville and Georgetown, where our overstimulated minds and taste buds transitioned back to a slower, quieter pace of life.

By the time we reached Southport, N.C. the weather gods decided they had given us enough favorable conditions for cruising. We discovered why the adjacent Cape Fear River is aptly named; that's a story for another time. Suffice it to say that Southport charmed our shorts off (figuratively), and we didn't let the persistently nasty weather cloud our view of this quintessential southern waterfront community, which doubles as a movie set (Nights in Rodanthe, Crimes of the Heart, Safe Haven).

Innumerable books have been written about the must-see towns surrounding Pamlico and Albemarle Sounds such as Oriental, New Bern, Washington, Edenton and Elizabeth City. A Looper could spend years traveling the ICW from one of them to the other and still not do them justice.

Upon reaching Albemarle Sound, we decided to continue north on the slow route to Virginia via the Great Dismal Swamp Canal rather than the faster route via Currituck Sound. Originally surveyed by George Washington, we found the canal anything but dismal and enjoyed learning about its remarkable history at the Dismal Swamp Welcome Center.

Norfolk, Va., played host to the America's Great Loop Cruisers' Association (AGLCA) spring rendezvous in the beginning of May. This four-day event armed Loopers with all the information they needed to successfully complete the trek up into Canada, through the Great Lakes and down the rivers that flow below Chicago.

Chesapeake Bay probably has more cruising guide books written about her than any other body of water on the East Coast. A quiet anchorage in Jackson Creek, a mooring ball at Zahniser's Yachting Center in nearby Solomons, and another anchorage in Harness Creek on South River kept us in our laid-back cruising rhythm. The slowly warming temperatures tugged us northward but we vowed to someday return to spend an entire summer on the Chesapeake.

‍Spiritus enjoyed a front-row berth at the Annapolis City Docks, perfect for watching the Memorial Day parade come down Main Street. We took a tour of the U.S. Naval Academy, watched the cadet graduation parade and visited the elaborate crypt of John Paul Jones.

The next major hurdle we faced was to get safely down the Delaware River. The staff at Delaware City Marina graciously lent its expert advice for tackling the tide flow and river current. As a result, our six-hour cruise to Cape May, N.J., with five other Looper boats went without a hitch.

Cruising up the coast of New Jersey via the Atlantic Ocean rather than the ICW requires more patience than skill. Waiting for a good weather window is definitely easier if you don't have a schedule! Our patience was rewarded with smooth seas and clear blue skies during our three days of offshore travel. After overnight stops in Atlantic City and Manasquan, N.J. we entered New York Harbor the first week of June and dropped our anchor behind the Statue of Liberty, right on the heels of the arrival of shorts weather!

Read More
Cruising Stories
 Back To All Destinations